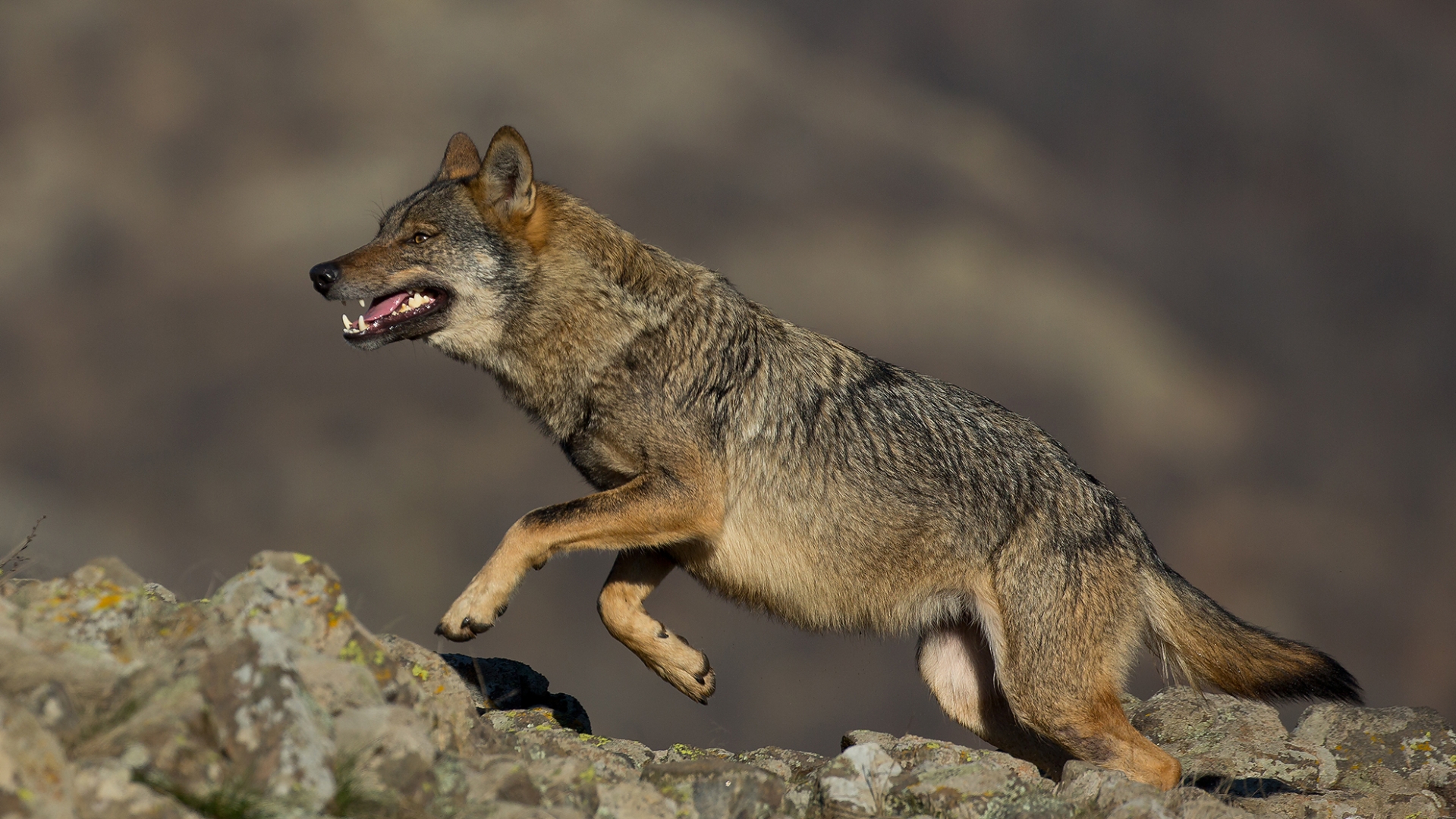 Wild stories from the Rhodope Mountains

I have told this story before, but only to individual friends. Now I decided to share it with everyone, along with photos.

Mid January 2015, I'm on a photography tour organized by Wild Echo, whom I was working for at the time as a guide. The group is small - Sheila and Geoffrey Blamire - a pleasant English family. Sheila is a photographer and Geoffrey follows her everywhere on her adventures, to keep himself busy he films videos with a small camera. We are going to Madjarovo, where for the next 3 days we will remain in the raptor shelter of Marin Kurtev. Hoping to get some good pictures of golden eagles and griffon vultures. Of course, I quietly hope to see and photograph wolves appearing on the feeding grounds, but they are pretty secretive and come mainly after dark.

A big cow carcass has been put in front of the hide, which has been there for 1-2 days, and as Marin said ′′ The landscape is stinky and we're in good chance for wolves!". Of course the ′′ stink ′′ attracts not only wild but domestic animals. This is the reason we have one, two and sometimes three shepherd’s dogs permanently in front of the shelter. The main thing they do is lie near the carrion, occasionally nervously growling, sniffing the stones, and then marking them. The vultures are there, but they have landed on the rocks behind us, maybe about 200-300 meters away, waiting for the dogs to leave ... Alas, the dogs have no intention of going away - they continue to laze in the pleasant and sunny January weather and that's it! Only golden eagles hover over the dogs, but refuse to land near them and feed. The sharp light slowly slips away becoming soft and pleasant, soon the rocks that serve as background are dyed in pink and red tones, but we only have dogs. Soon the warm colours change to blue grays, the sun is behind the horizon, and we can hear off-road engines, which puts an end to our hopes for photos that day. 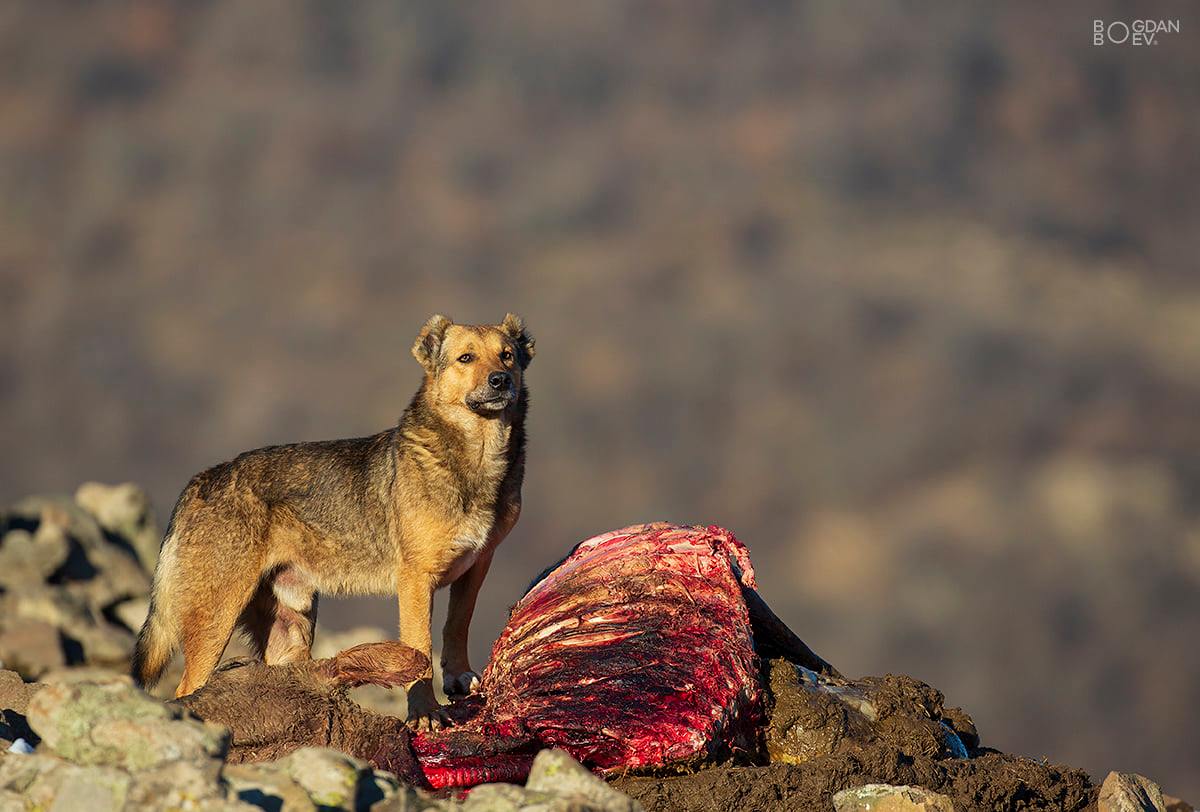 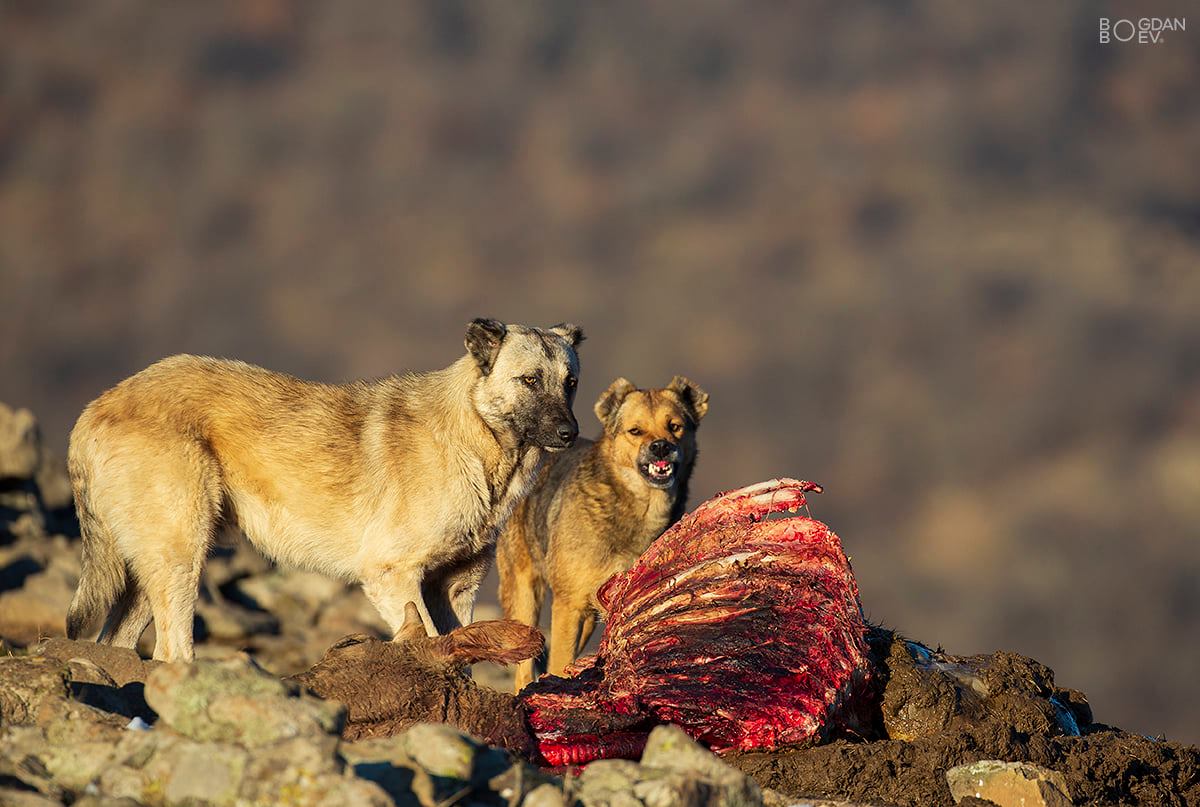 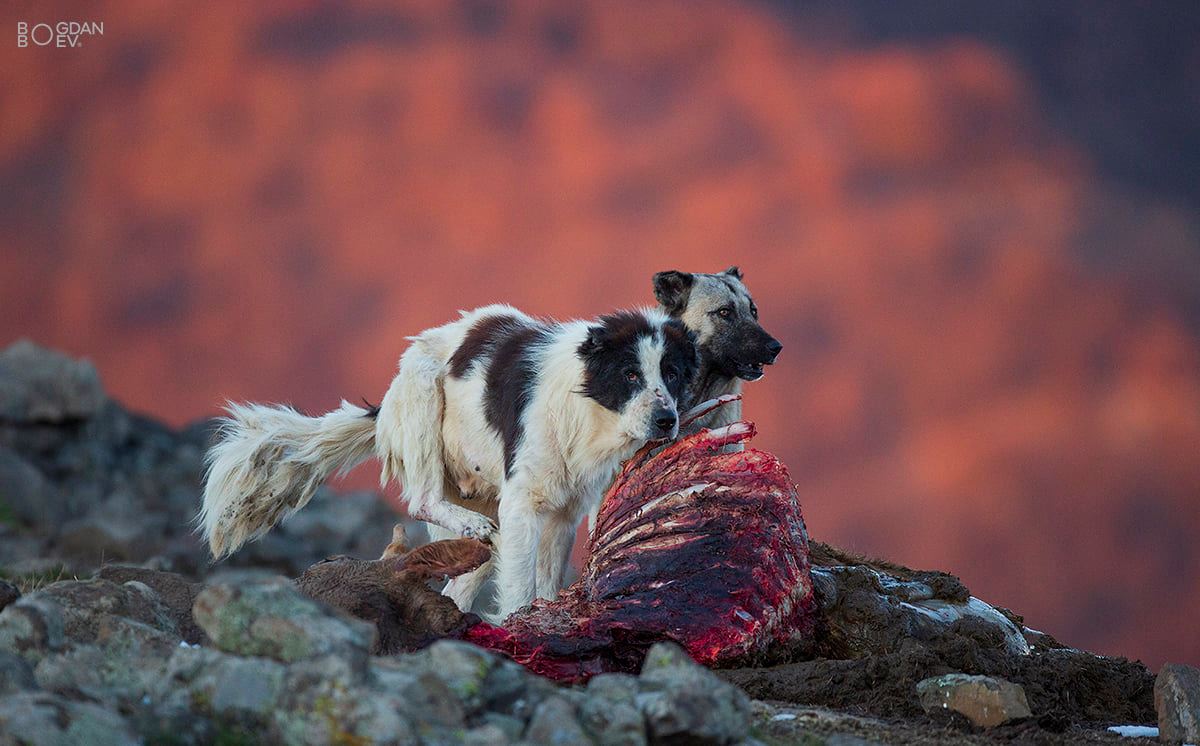 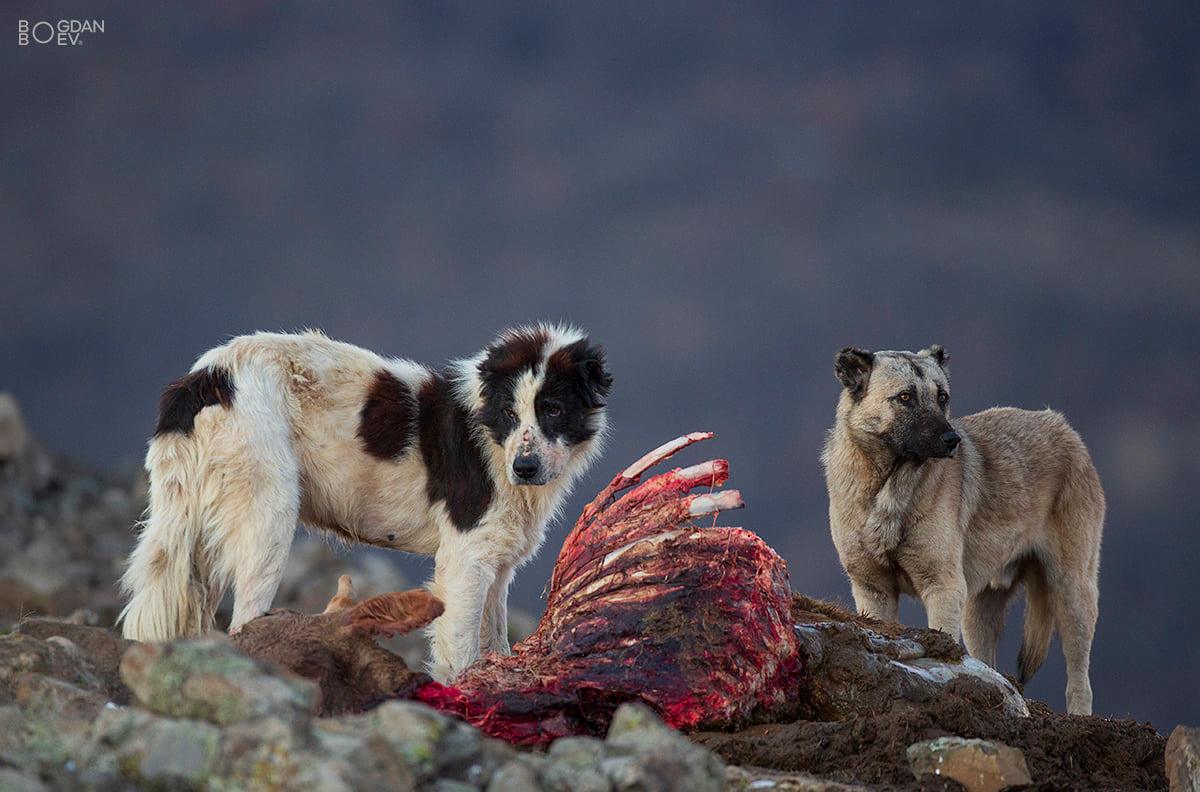 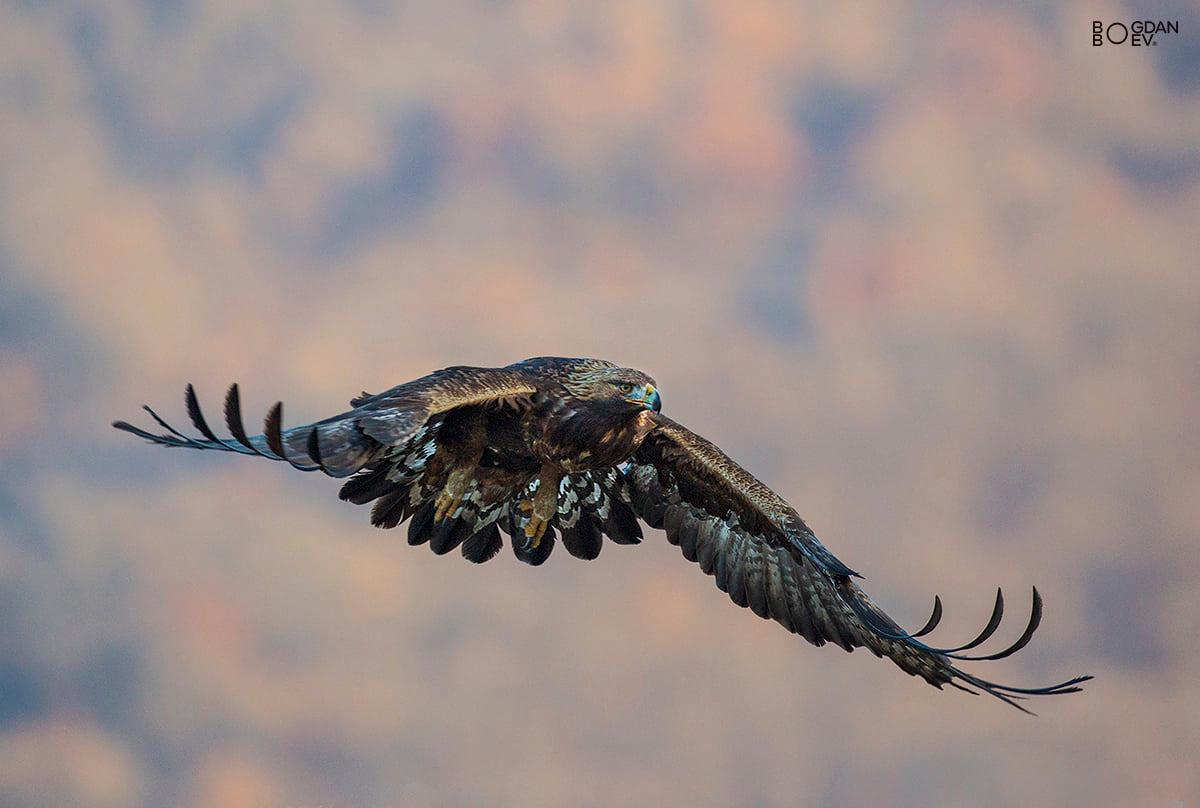 We enter again after dark and meet the sunrise in anticipation. We notice that the cow is in a completely different position to the one we left it the day before - someone pulled it seriously at night. The light comes, and with it two of our familiar dogs. They act nervous again, sniff and mark the stones, dig with their paws and periodically walk to the edge of the cliffs and look staring down with ears and tails alert. Greenfinch and mistle thrush fly past the hide and vultures are here again hundreds of meters away from us waiting patiently for their feast time to come. The day was warm and pleasant again, the dogs chilling-out again, until suddenly one stood up, raised his nose and headed towards the edge of the rocks. He stared, his tail and ears sharpened as a sign of agitation..., he sat like this for a few seconds, then twisted around himself twice and ran in the opposite direction. The other dog also fled. We nailed our attention to the direction the dog was looking because we knew something was coming from there..., something ′′ exciting ′′ enough to chase them away. A few seconds later a gray wolf came along and ran swiftly past! Because he was chasing the dogs, he did not pay attention to the lens that followed him. He came back from the direction he disappeared and started marking and digging about the same rocks that the dogs had marked previously. He went to the cow and started sniffing; a few times he bit something and started pulling it. His activity was repeatedly interrupted by something in the distance that made him nervously raise head, wrinkle his muzzle nervously and growl. Apparently the dogs were staring at him from the nearby shrubs, where they had hidden after the race. This was all happening in the early afternoon; nevertheless the low winter sun gave us very nice photo-friendly light. We made 2-3 frames in a series and paused so that the wolf wouldn't become nervous and leave. It was atypical to appear in broad daylight and apparently there was a reason for it that soon was revealed to us. The wolf had bitten and pulled the cow very fiercely. Eventually he pulled a calf from her corpse, which apparently should have been born very soon (judging by its size). He grabbed it and ran down to the gully. This tender piece of meat was the cause of his bold behaviour and he did not intend to share it with anyone else around. Five minutes after the wolf disappeared to the gully, a string of events followed - the butterfly effect. There were no more dogs, the top predator had taken their share and had released the arena for others to enter. One after another, griffon vultures began to arrive, who waited patiently for their turn for two days. About 10-15 birds gathered and pounced on the cow together; all this was of course accompanied by typical dinosaur sounds, battles and jumping on the backs. I tracked down a few of the arrivals for flight shots and then started watching the melee of wings, heads and legs consuming the cow. In a moment, something flew by and struck like a spear into the group of feeding vultures spreading them around. It was the golden eagle who nested just nearby. He grasped one of the fleeing vultures with its talons, flipped it in the air and changed its direction of flying. The eagle attacked a few more times then disappeared. The vultures came back shortly afterwards, the ones who already feasted were visible with their bloody heads. As the birds cleaned the cow's corpse, the light became soft again. The rocks gained pink and red tones, the shadows became long... it was the ′′ golden hour ". The last sun rays were also a signal for the vultures that it was time to go. A brief check and smoothing of the feathers followed by a final powerful shake off, and one after another they began to take off … meanwhile the rocks were coloured in cold blue tones. Just before we started putting our equipment in the backpacks, the wolf appeared again. This time he was quite suspicious and looked around the area thoroughly, he was in no hurry... Apparently he had come to check out what was left of the feast, and his body was showing that he had eaten generously from the calf. We took a few more shots of him before he disappeared again. Minutes later we heard the sound of the Marin’s car coming to pick us up. It was a fantastic day, or at least a few hours of it were filled with so much emotion. A time when we witnessed and came close to the secrets of wildlife, we learned more about nature’s laws and relations. Because of such moments, our time in nature is worth spending. Wildlife photography takes time, a major part of it goes into patiently waiting and contemplating for things to happen..., ′′ the longer we wait the luckier we are ′′ - this principle works flawlessly! 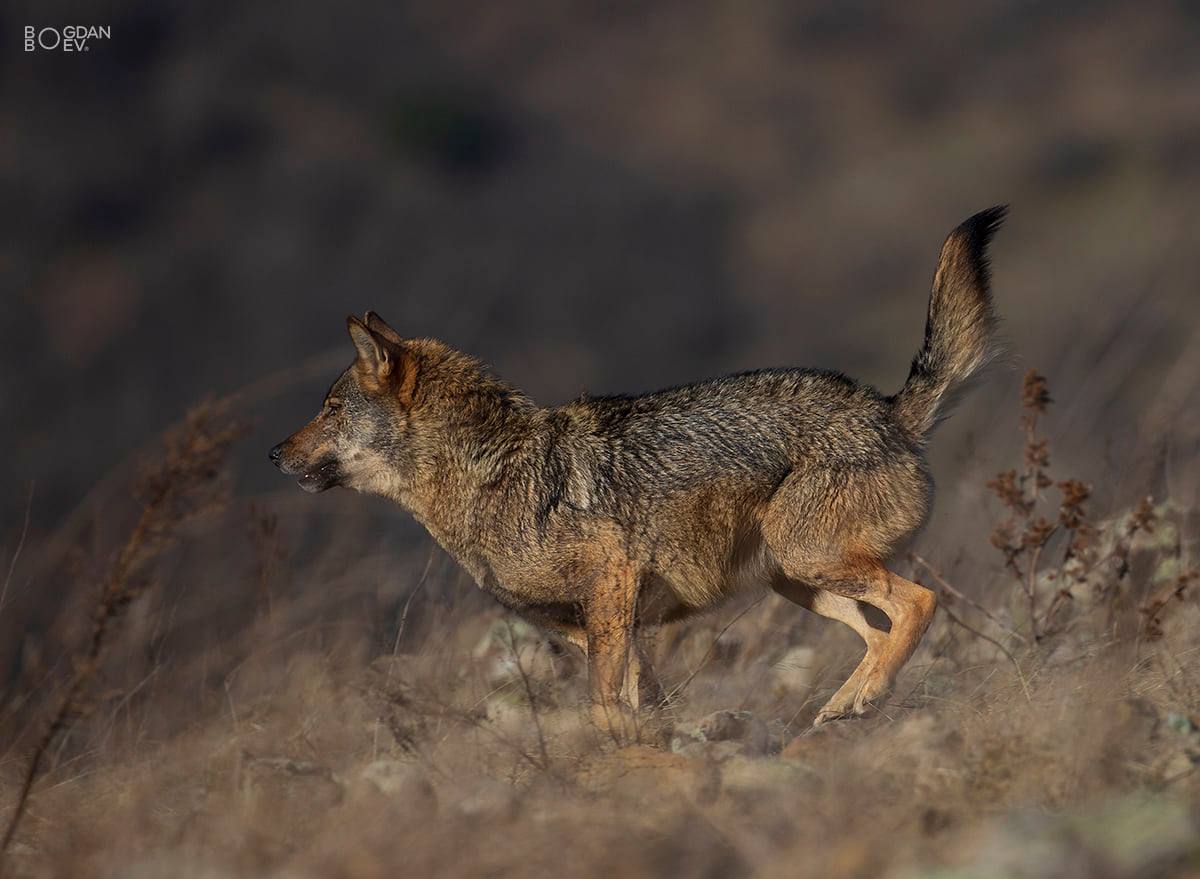 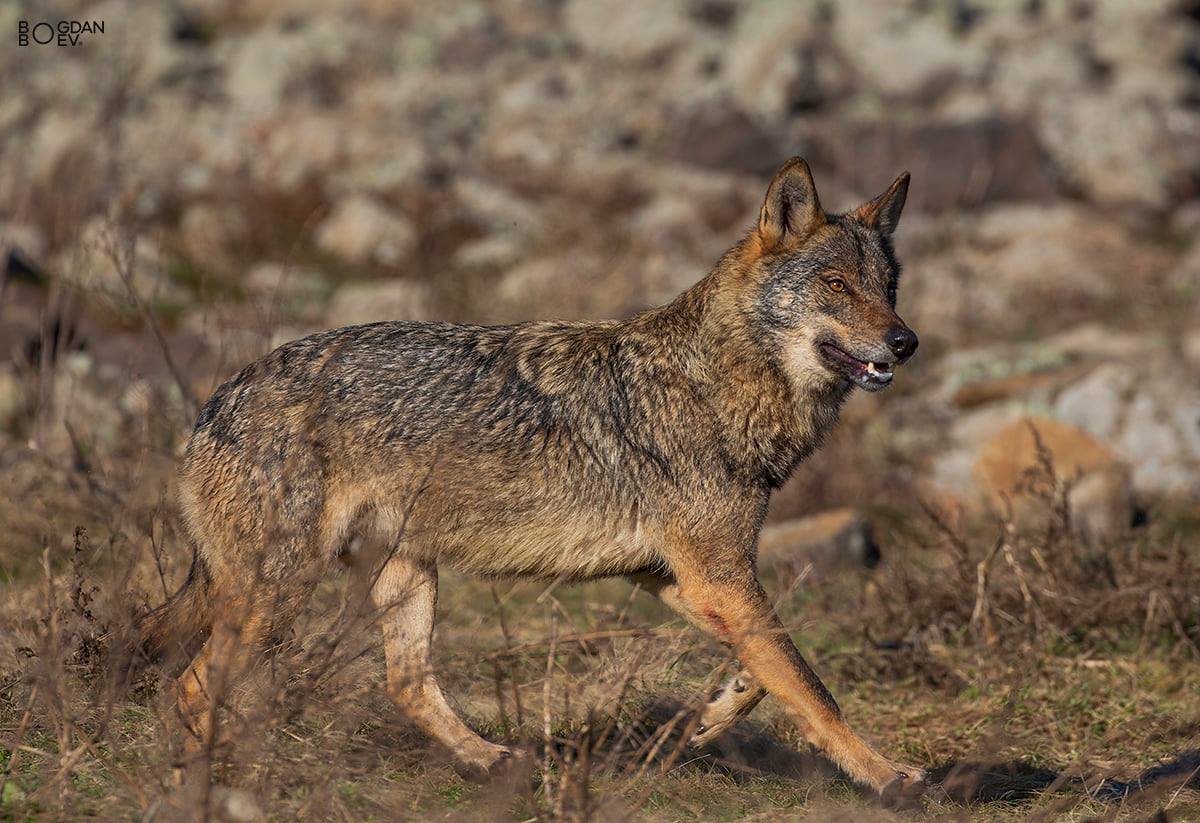 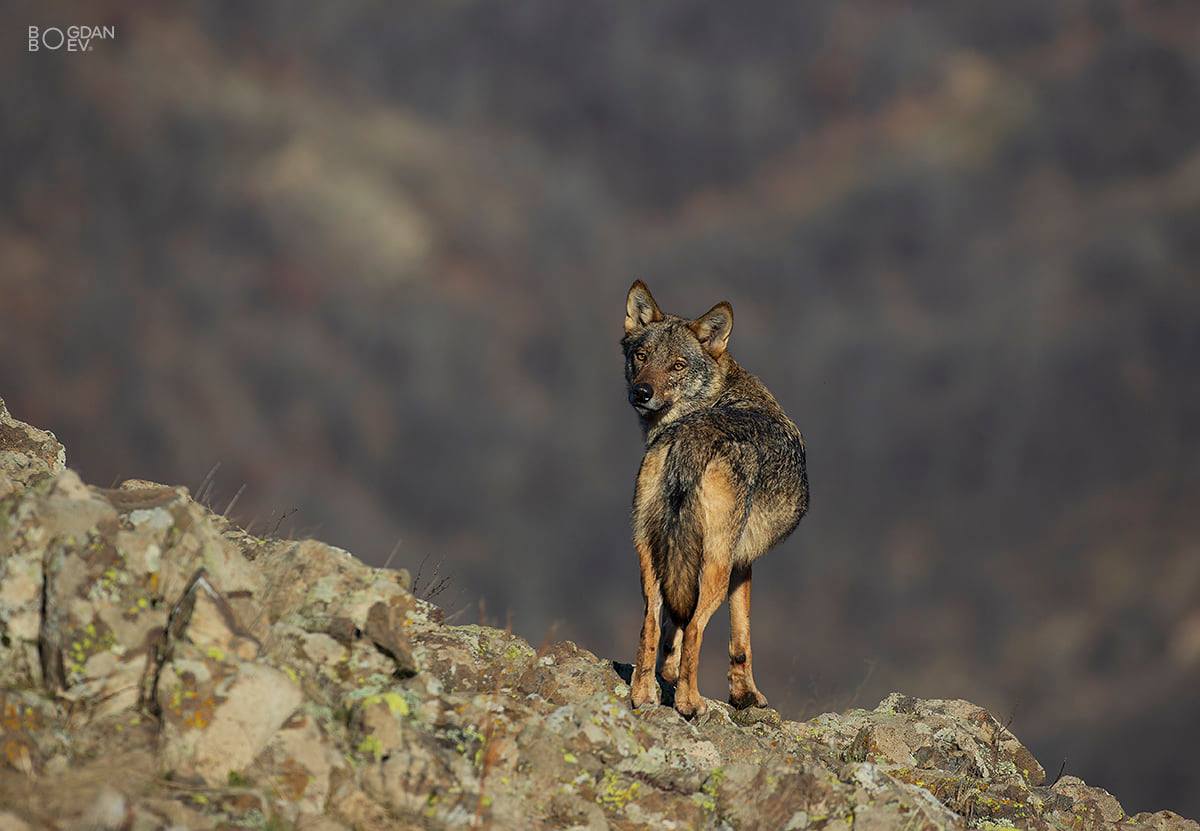 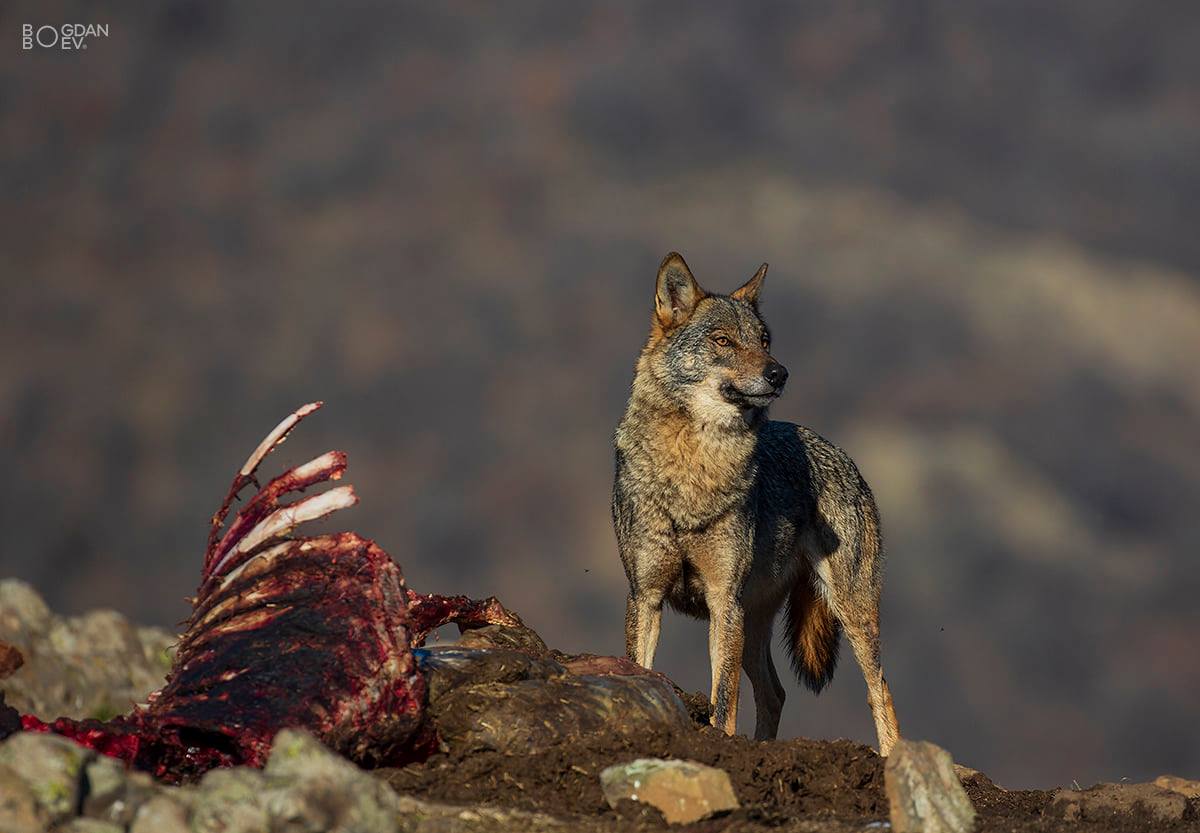 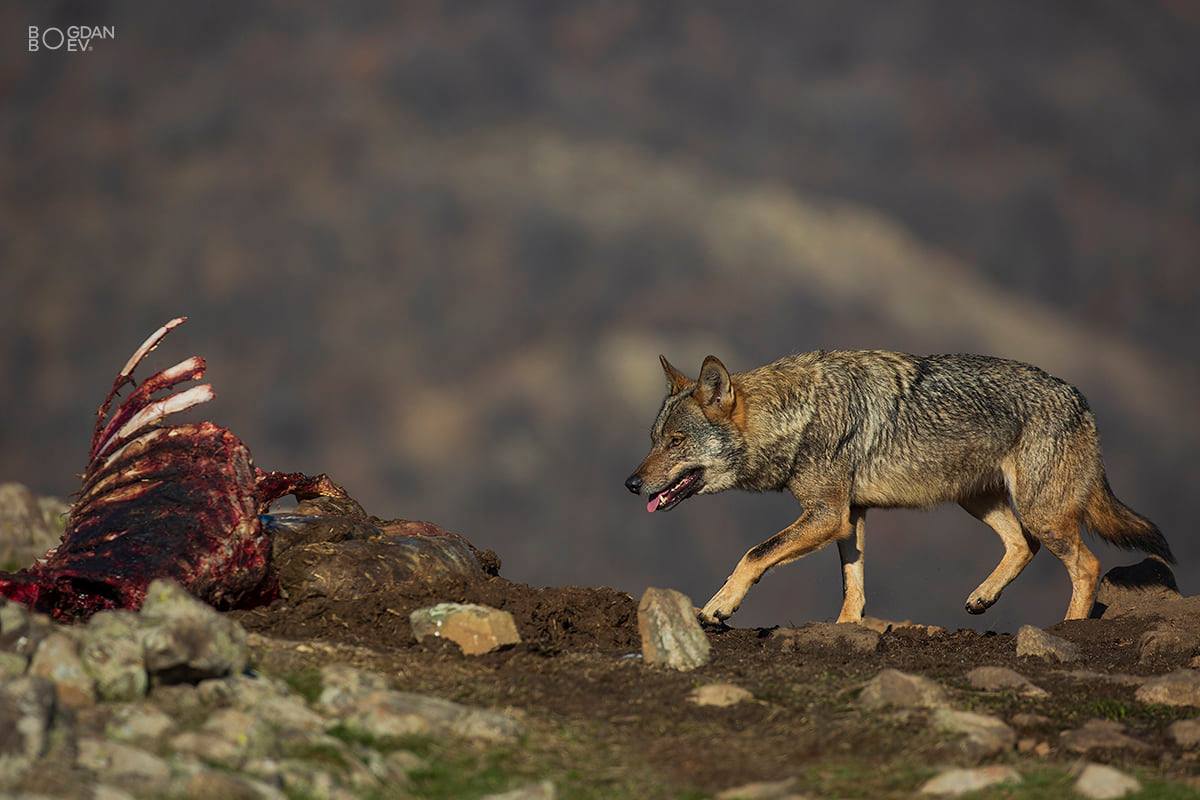 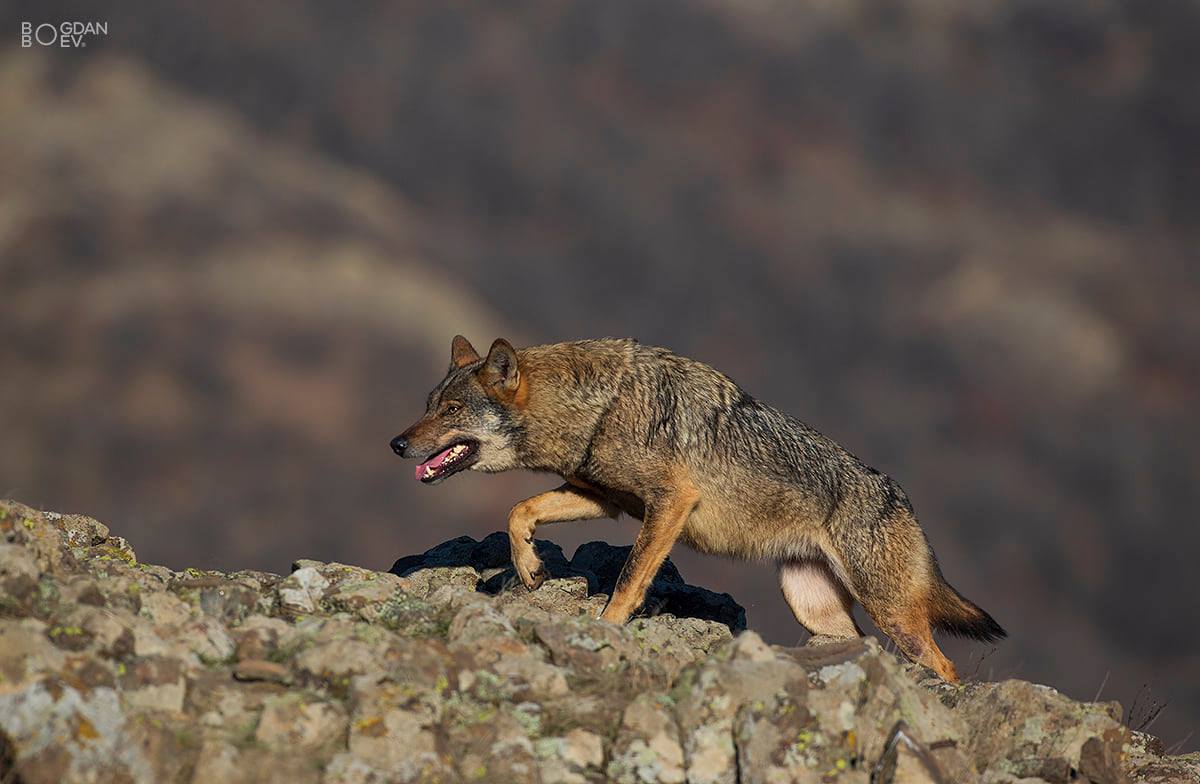 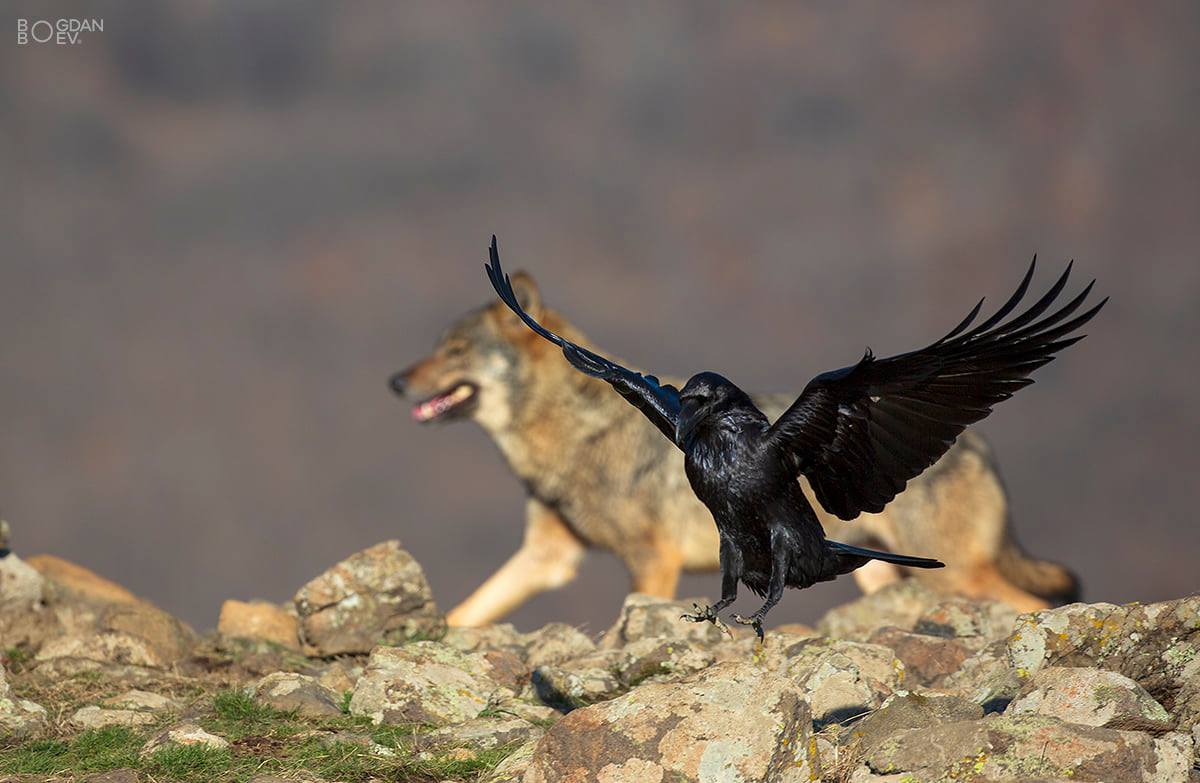 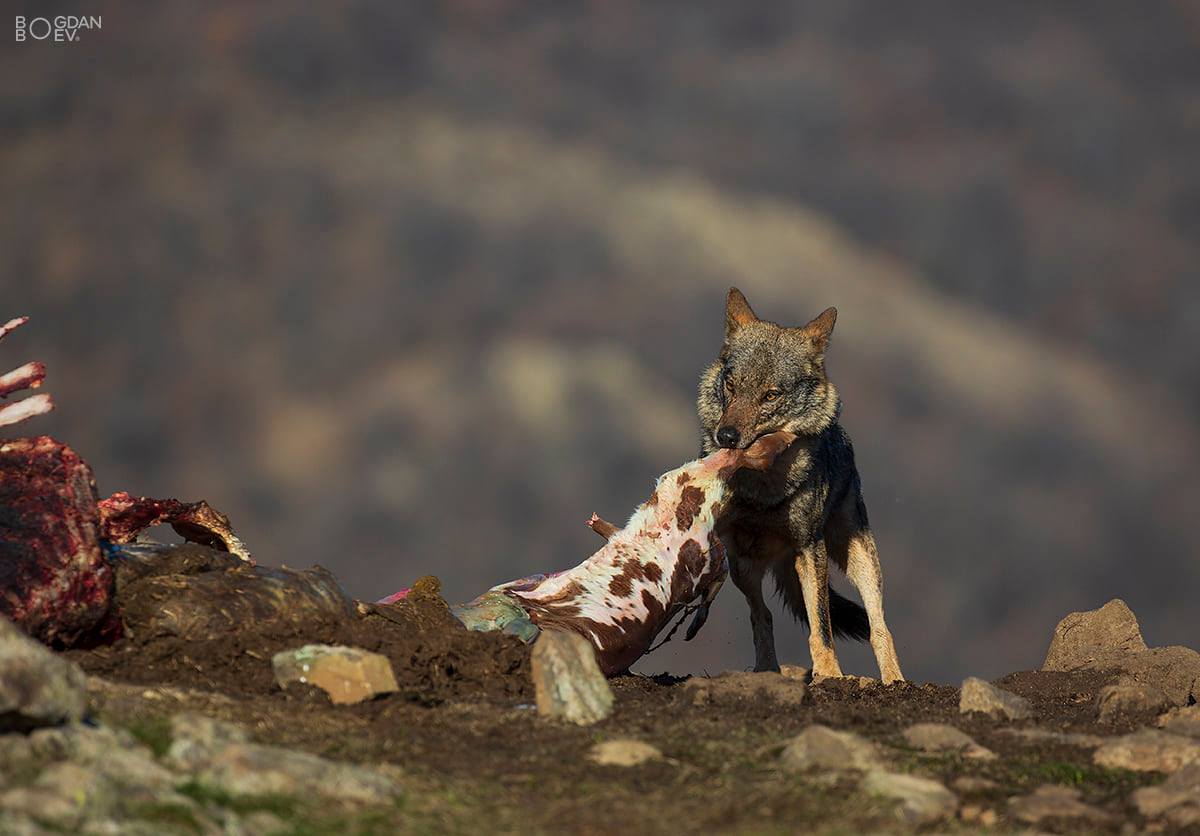 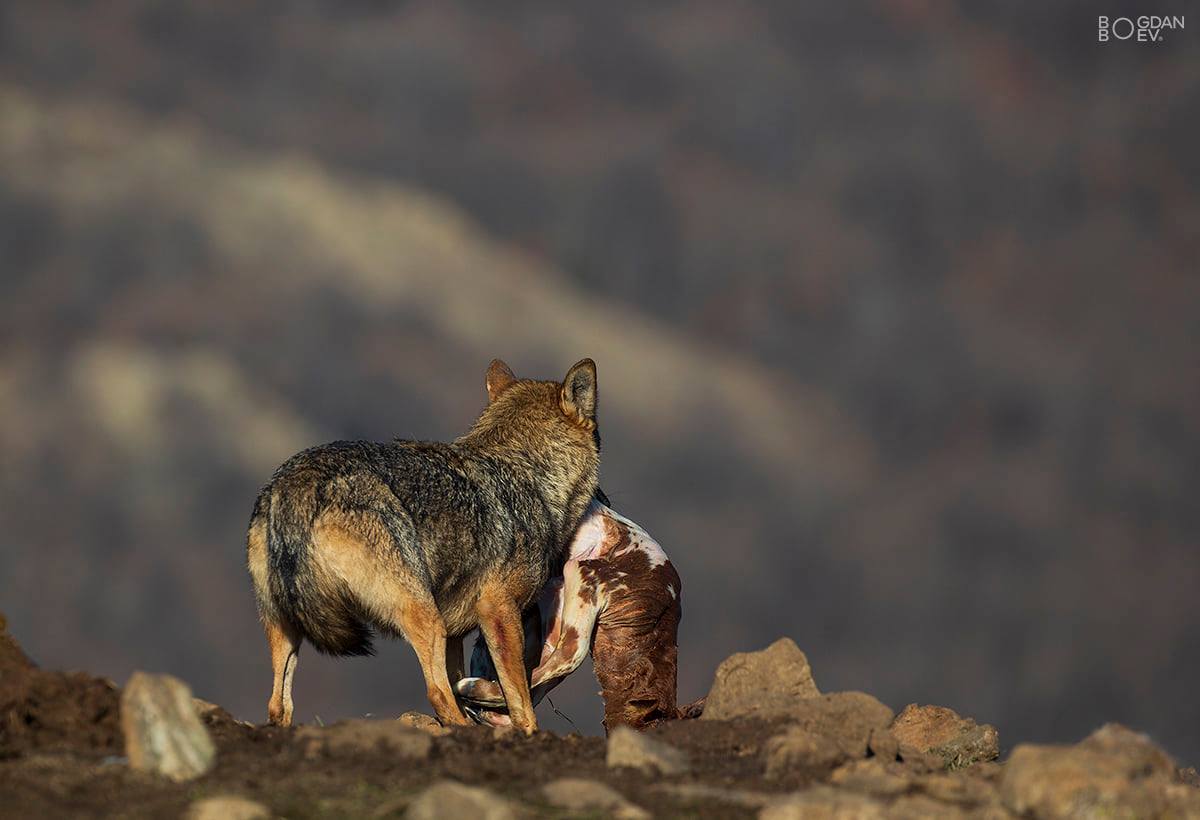 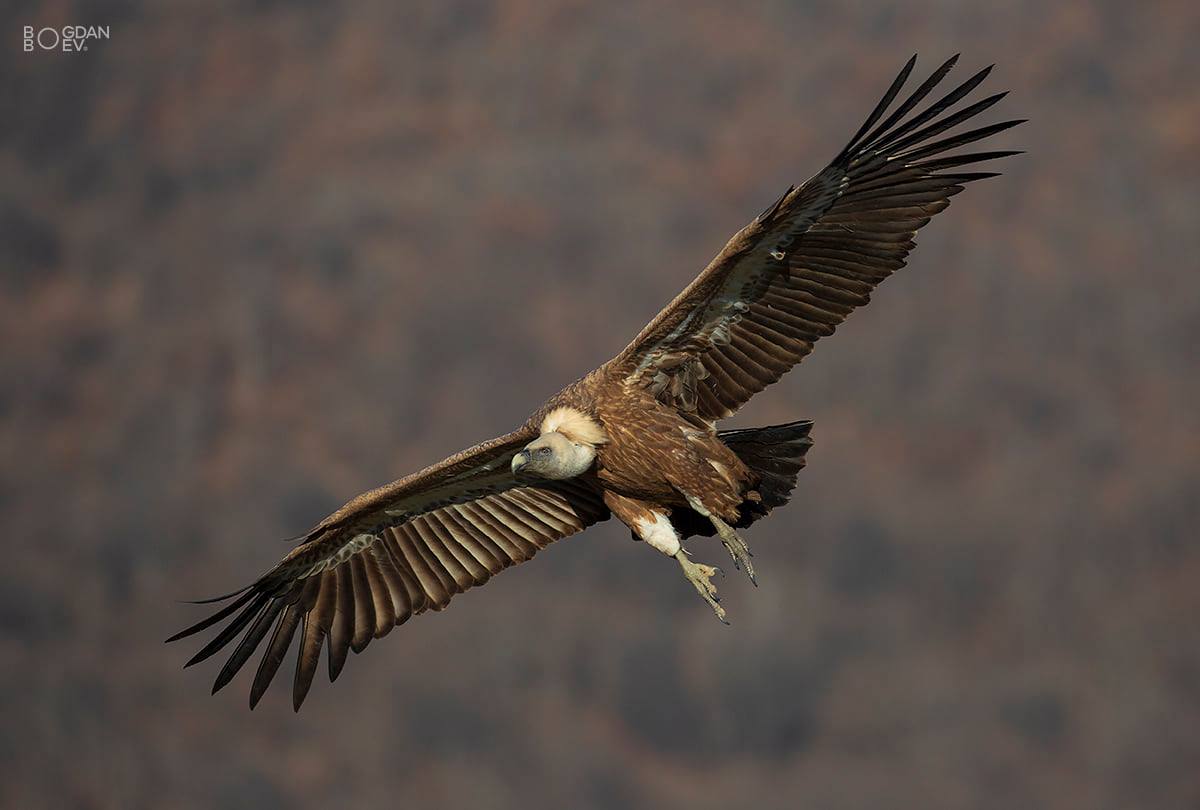 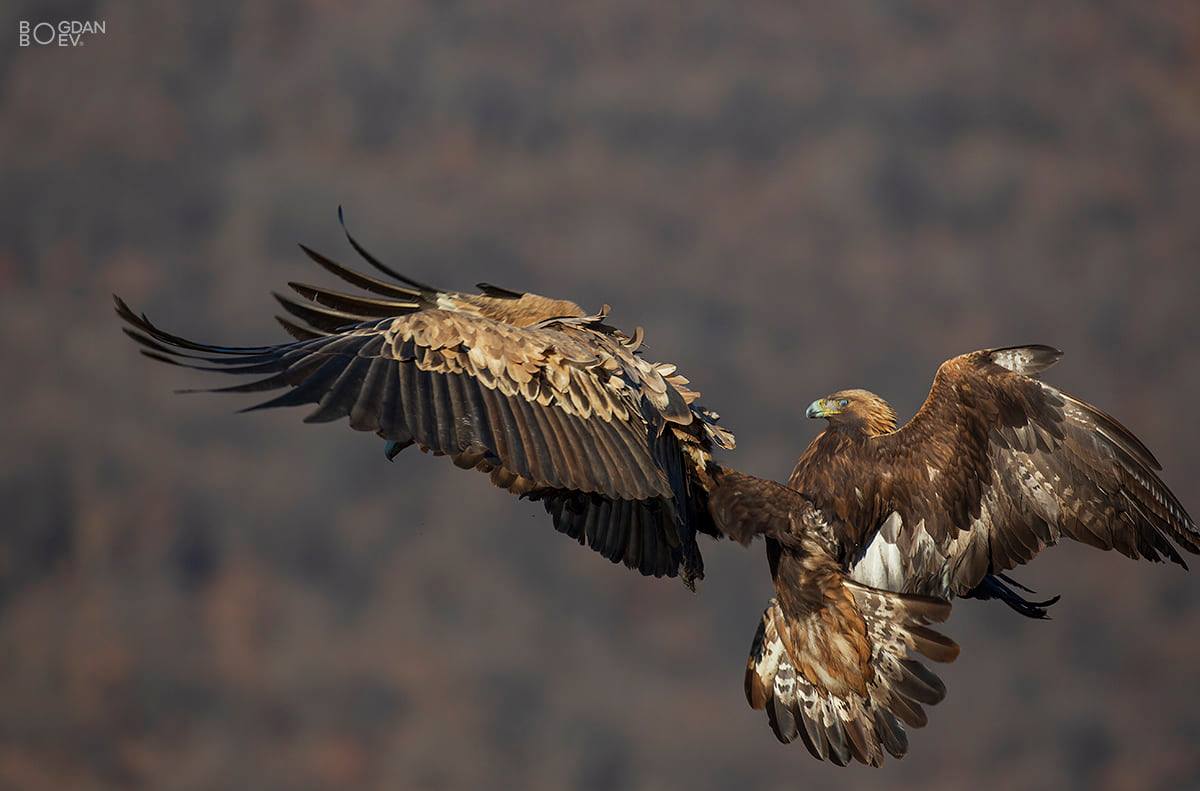 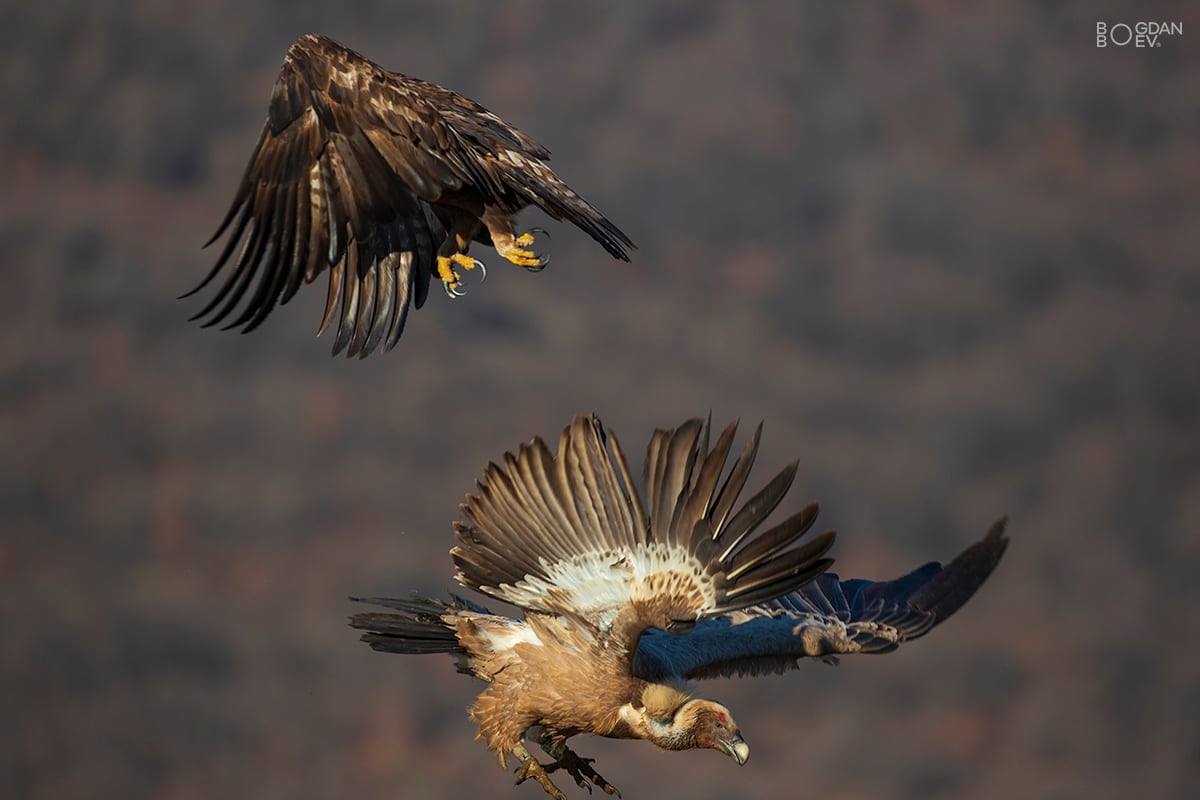 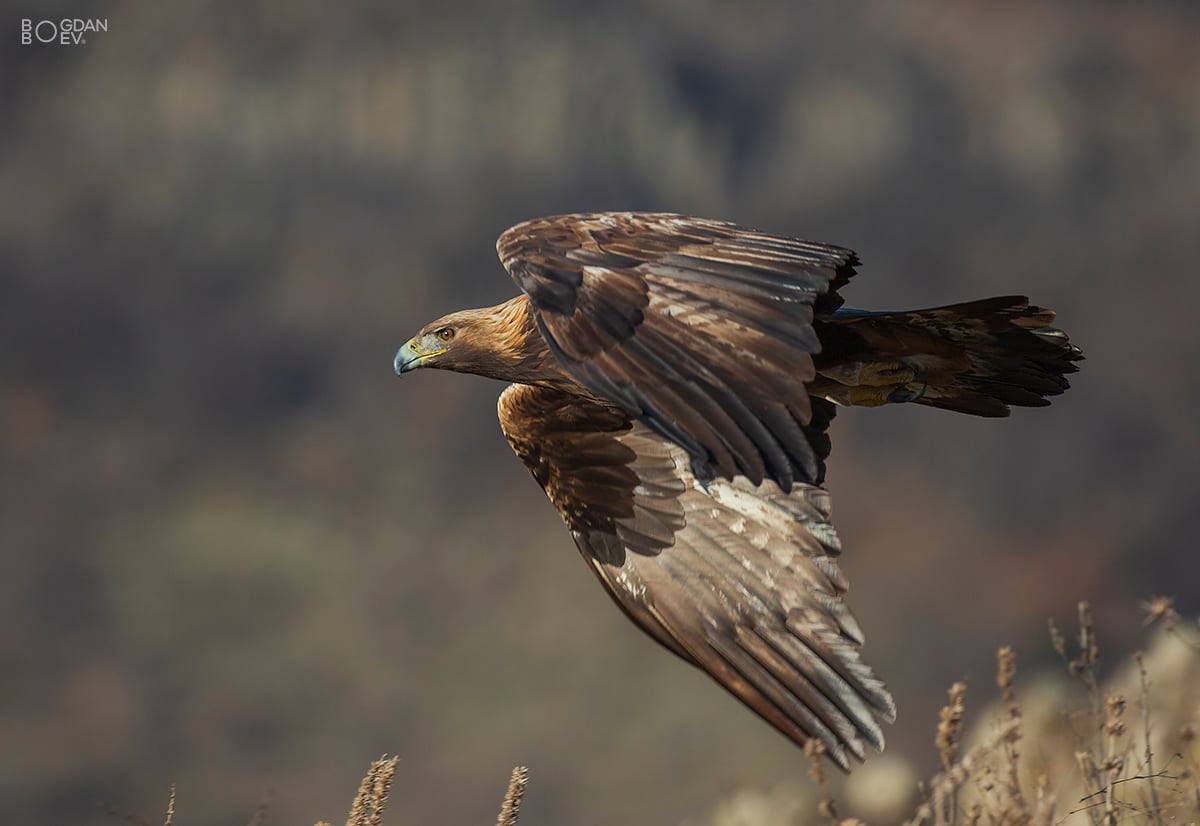 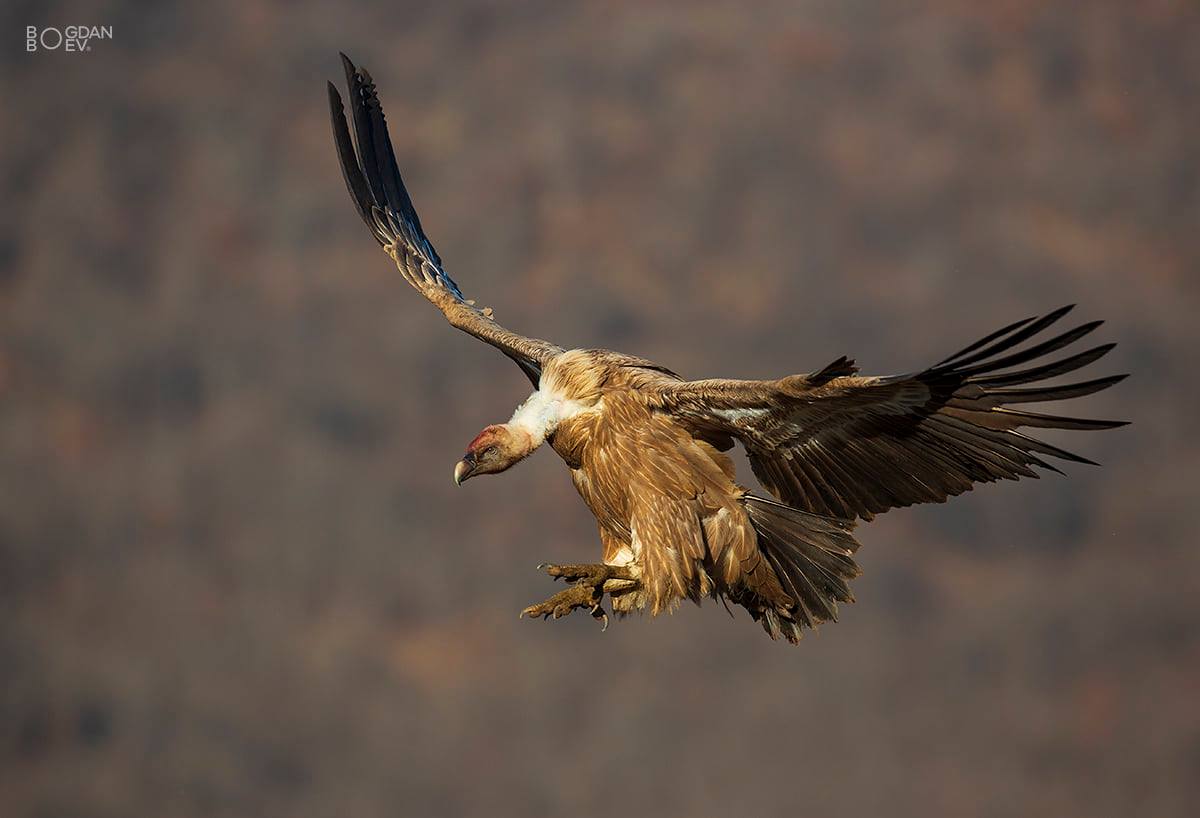 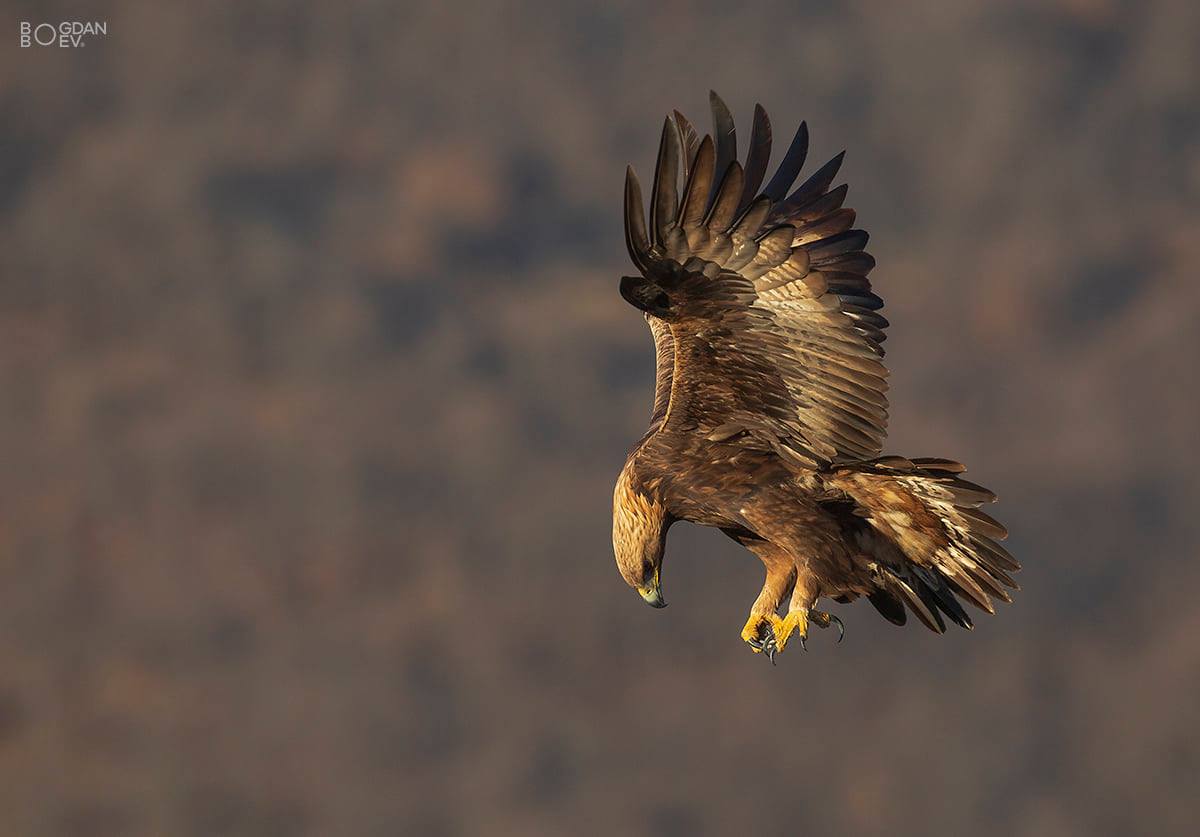 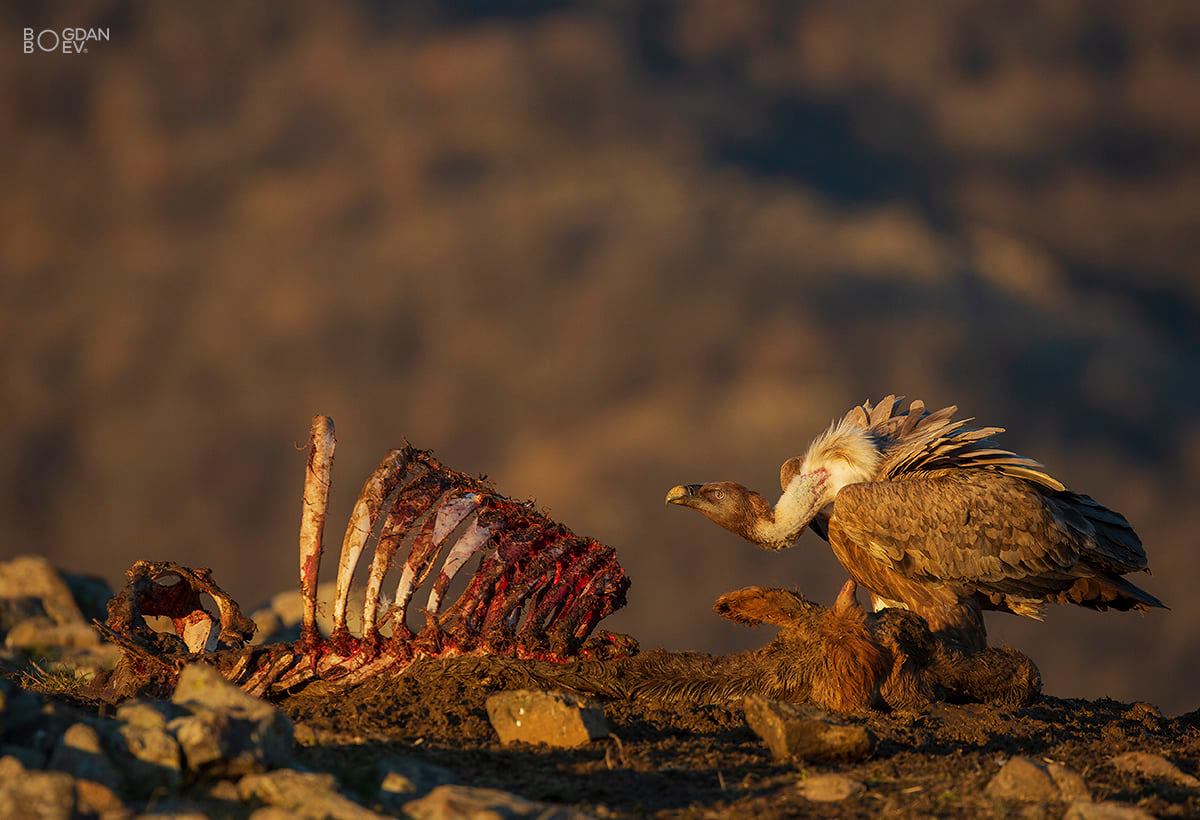 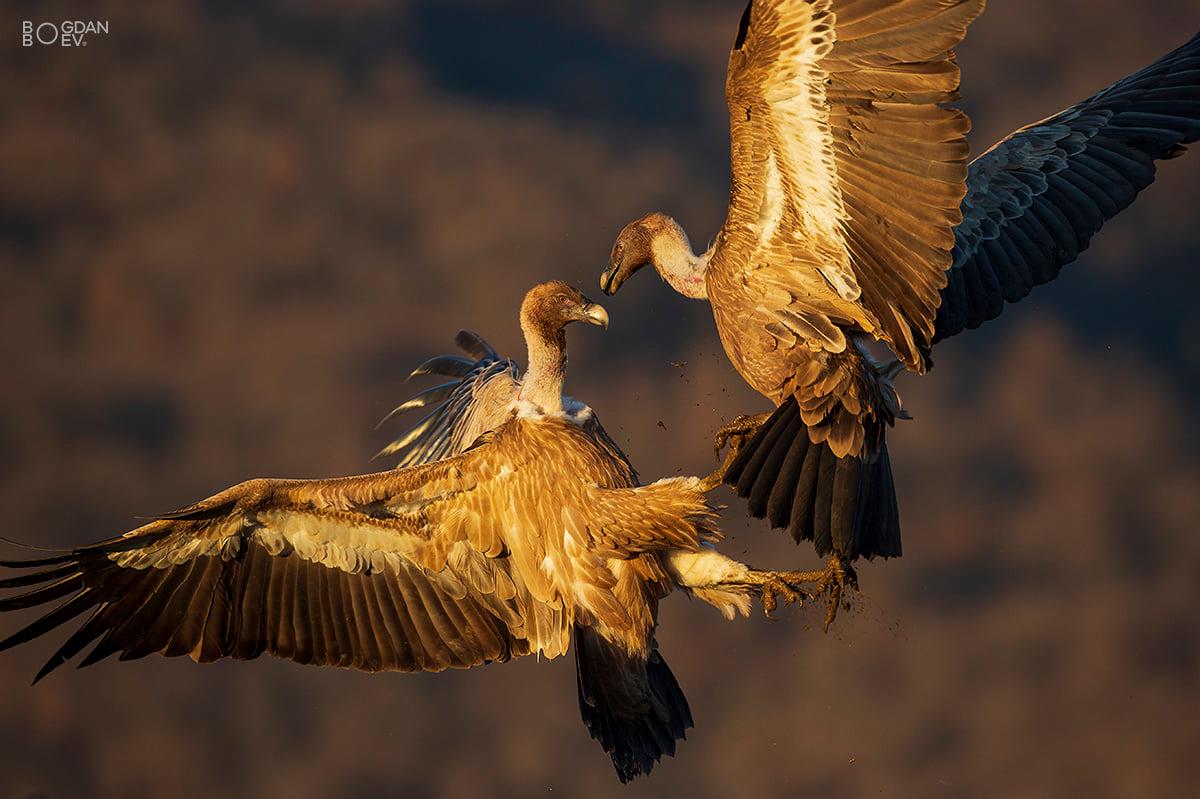 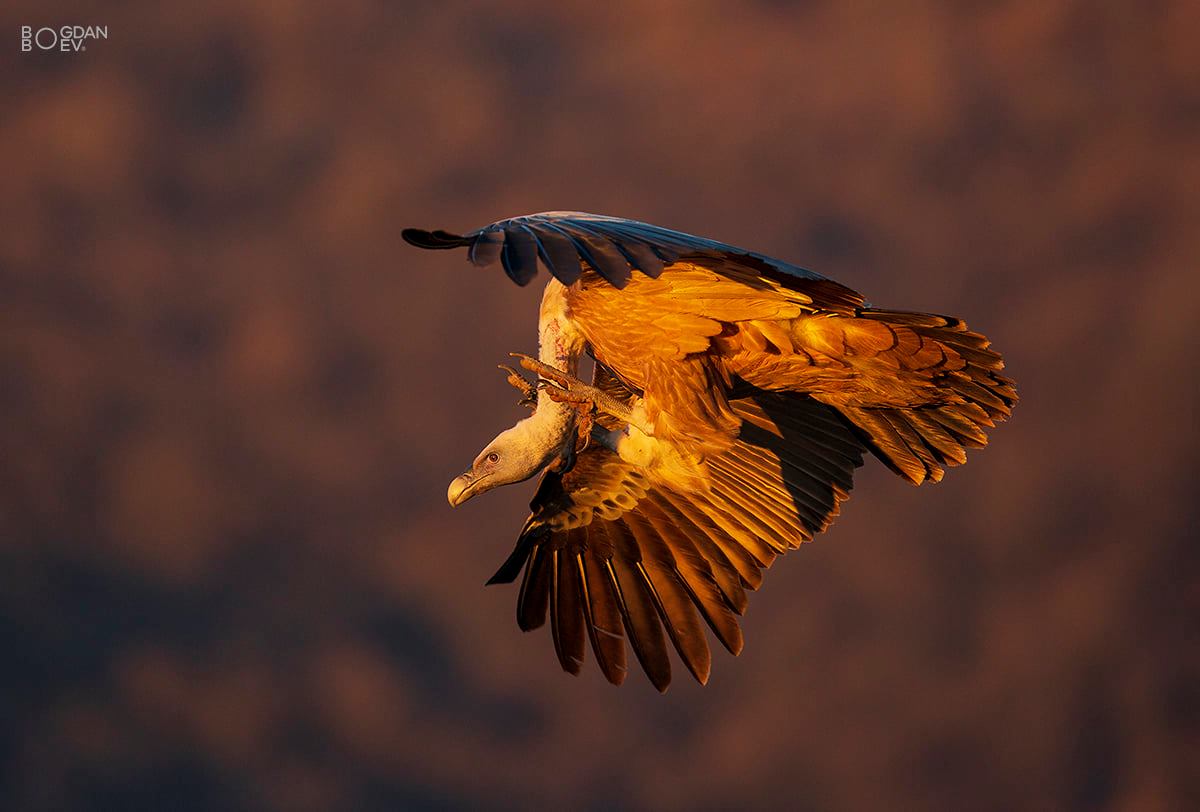 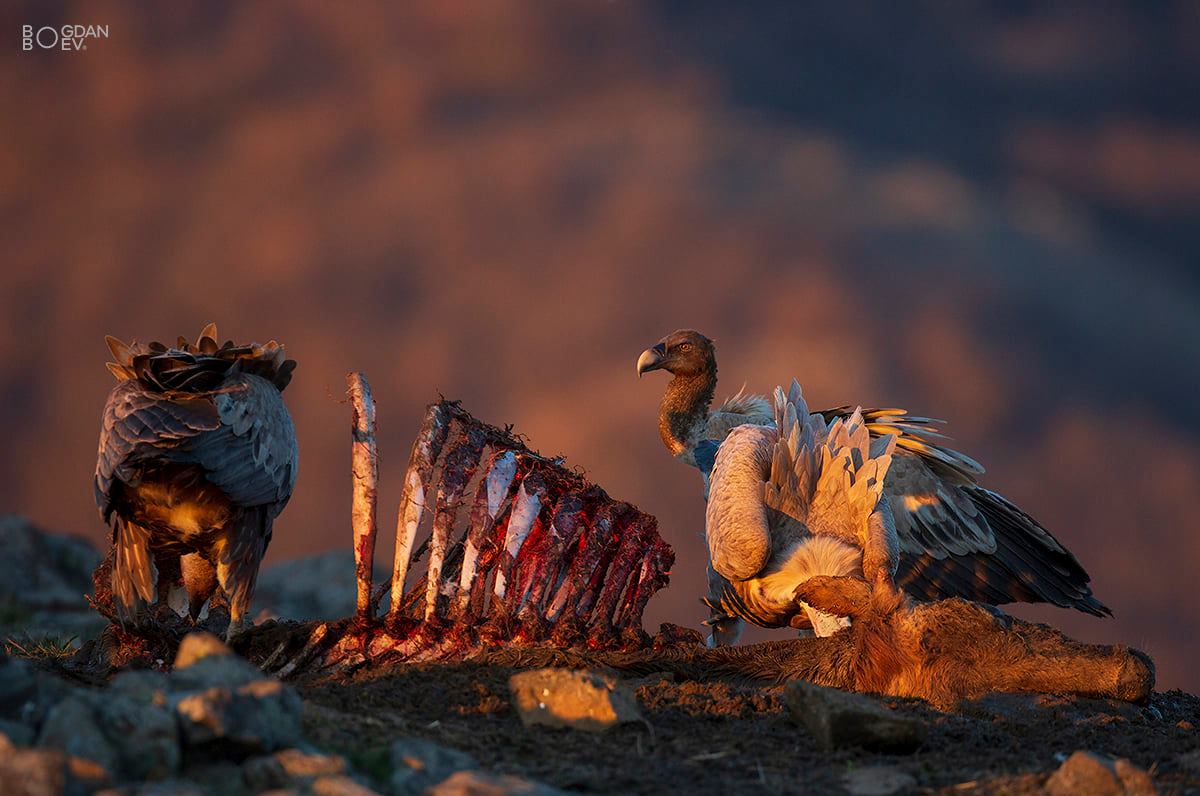 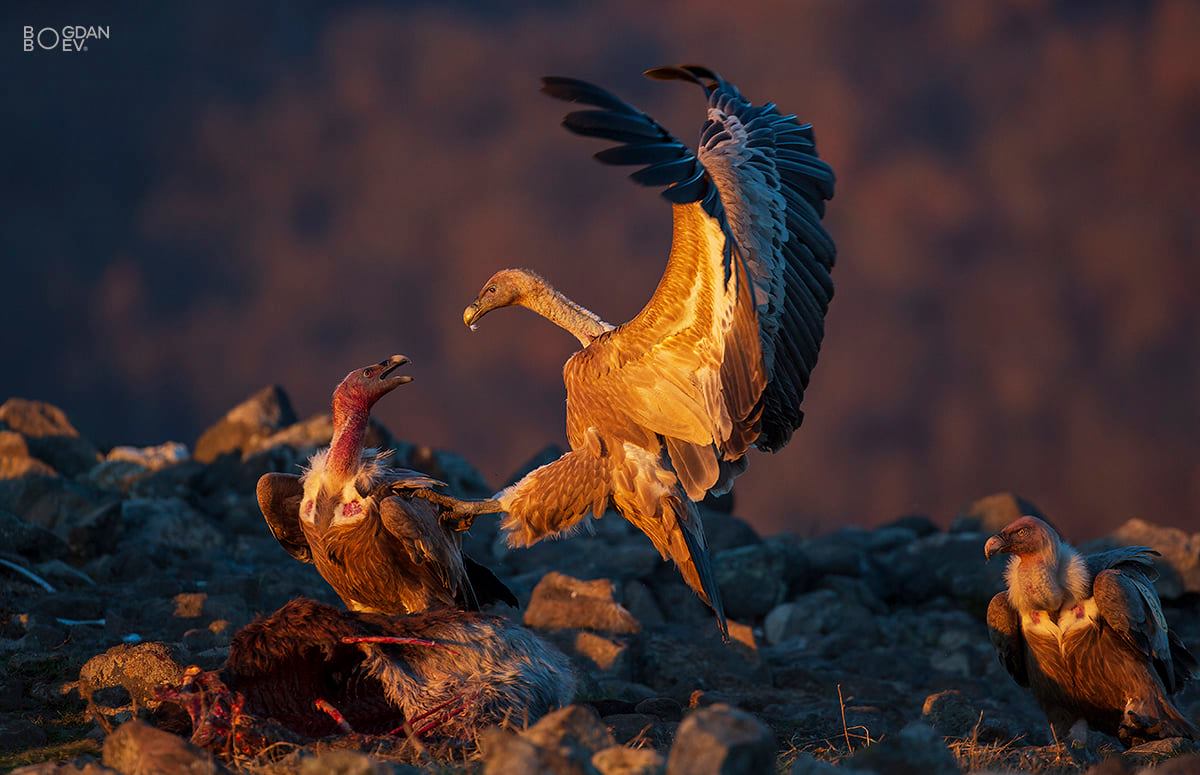 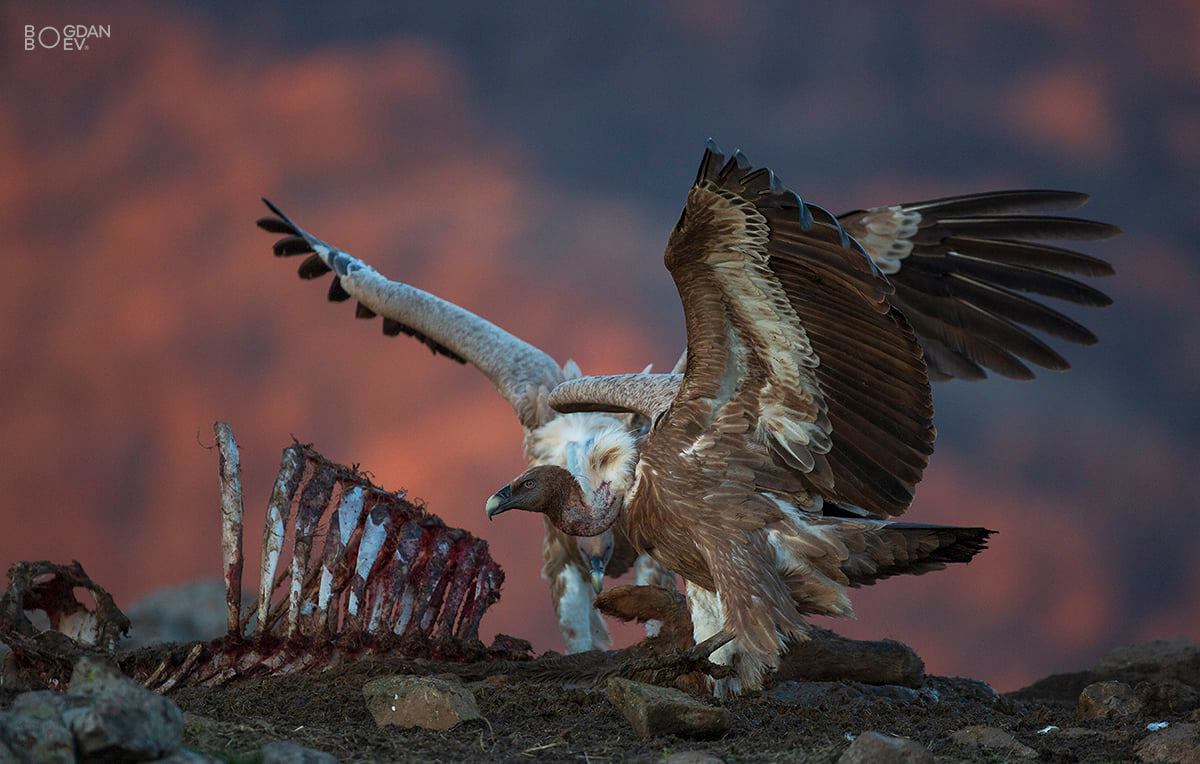 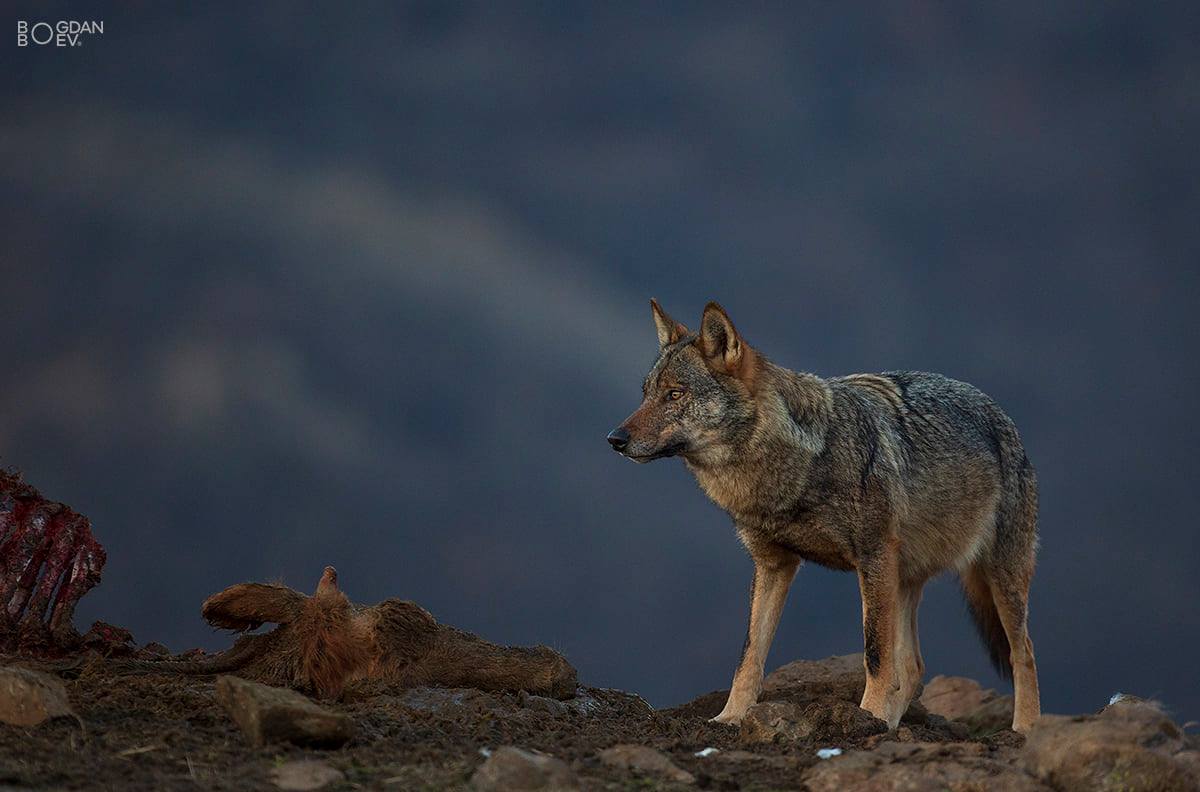 At the fog engulfed hide, nothing was seen... even if an elephant passed in front it wouldn't have been known... I received this information from a friend of mine (Krasimir Kostov) who was in the shelter waiting for the wolf to return! Meanwhile, we were at the Potochnica hide, where we were photographing vultures again - super afternoon light, warm autumn colours..., beauty.